There’s no sharing that magical black wand.
It is mine, and mine alone. With it
I summon a cast of friendly faces
as next to me she disappears
down the end of a cordless phone.

I was born when I wasn’t looking.
I assume my mother
was having me at the time,
but I cannot tell you for sure.

A year later, Hitler
put a gun in his mouth
and didn’t hear it go off.

I came into the world
at exactly the moment
an old salt was rowing a boat
to give me your answer do.

Had I drowned on that day
that is all of me I’d’ve saved
and taken to Heaven. 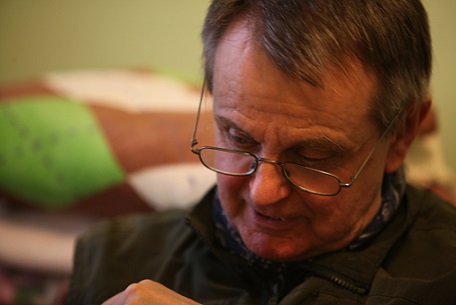 Biography: Richard Livermore was born in Sussex in 1944. He went to various boarding-schools and left at 15. He joined the Army, but was discharged 6 months later. He went from job to job and in 1974 to Newbattle Abbey College in Scotland. He has lived in Scotland ever since, except for 5 years in Spain. He has had numerous poems published in magazine and webzines in Britain and the USA, plus books by Lothlorien, Diehard and Chanticleer Press. He is presently retired.

Dead Snakes has sadly closed its doors.
It’s a great shame for the Small Press World.
Stephen Jarrell Williams has done,
for many years, a fantastic job over there
and will be very much missed.
Go check out Dead Snakes archives,
seriously, do yourself a favour!

Ivor comes in the bar
with 7 and a half turkey sandwiches.
“You want a half?” he asks me.
“I know where you got’em” I say.
It’s Christmas and an army
of Christian youth
are marching through the slum
handing out food.
Outside I smoke and watch
as a group breaks off
to pray with a homeless woman,
a wreath of blonde hair
punctuated by a single
brown chestnut.

Jon Bennett is a Pushcart Award nominated writer and musician living in the Tenderloin neighborhood of San Francisco. His novel, The Unfat, is available through his website, http://www.jonbennett.info, and his music can be found on Pandora and Spotify.

It was New Years Eve
and we had roughly half hour
before we’d be properly missed.
We pulled each other
frantically into a back lane.
All fingers, tongues
& knicker elastic.
Heading backwards & sideways
towards the nearest rubbish bins
to have a knee-trembler up against.
(Class… pure class!)
I’d perfected this
rough & tumble encounter
whilst still in school
but in the decades since
I’d honed shoehorning
into an art form.
But the Devil was against us
this almost unfaithful evening.
There was a homeless guy
standing under the one lightbulb
wooden lamppost.
With his combat trousers
around his ankles
and what looked like
a jug of gravy
thrown all up and down
his shivering arse & legs
(He even had some
splashed on his cock!)
“Eww!” she exclaimed
and I felt her dry up instantly
like Autumn on fast-forward.
“It’s Ok for you… you can walk
away from me… I can’t!”
He exclaimed desperately.
I laughed sadly,
pulled a bottle of Mad Dog
from my coat pocket
and left it on the ground for him,
leaving the lane 10 steps behind her.

Not writing isn’t an option. I started very young, too young to have an idea of a “why.” So, I think maybe there isn’t one. Or that I’m too tired to remember it right now. Maybe both.

Honestly, right now, I don’t very much anymore. I read so many in graduate school (both times) that I’m sick of reading. I read poetry and essays by women who send them to me for a book I’m editing with Lara Lillibridge. Oh, wait. Maybe that’s why I’m sick of reading.

Everything. Pain. Misery. Love. Also hopscotch with my youngest niece or listening to my oldest talk about her photographs or discussing life with my very inquisitive nephew.

I started writing very young. Seven. So, I have no real memory of the day I knew I wanted to be a writer. seems like I always knew. Now, the better question would be, “when did you tell your parents and how?” Because I have actual photo evidence of that below.

THAT is me in my mother’s velvet suit jacket. I’m nine-ish. I have on her giant, awful 1980s sunglasses. Pen and notebook in hand. That’s the day I told them I was going to be a writer. Because, you know….you have to look like you know what you’re doing. Apparently, I really knew the hell out of what I was doing judging by that swanky velvet jacket, bad perm, and over-sized glasses. Any writer worth her salt owns an outfit exactly like this and wears it to any and all writerly functions or people will just never take her seriously.

How do you deal with rejection?

I started sending letters to publishing companies when I was 14 asking them if they would publish my “collection of short stories.” Yes. A “collection” of maybe 5 stories by a 14 year old. Naturally, I had a heaping bag of rejection letters that I kept for years, until I finally threw them out because I couldn’t remember why I had been keeping them. Since I started so early, I have little reaction to rejection of that sort now. I think, shit, that sucks. Then, move on. Now, you didn’t specify, so maybe you meant rejection from men? That has never happened to me. I am basically flawless. It’s ridiculous how many people are in love with me right this second. I mean. Right. At. This. Second. (For people who don’t understand sarcasm that was a joke.)

whomever will get me into magazines and an agent if I mention them. Pfffft. Kidding. I admire so many. That’s an impossible list to compile. It begins with personal friends of mine to someone whose work I only read once, to someone I’ve never met and whose name I forgot who posts one poem online that strikes a chord at the right time. I also love writers who are new and trying and lost and striving. I love seeing that kind of passion that so many experienced writers have lost, you know, the ones who are so accomplished they’re bored or they aren’t famous, so they’ve given up. I love writing. LOVE. Your gift can never let you down.

Nope. I was in a little duo for many years and sang in bars with a guitarist who wrote songs. We sang lots of covers, too. I was not trained in it but I loved it. I also just started to paint this last year, which I don’t know anything about. I prefer to keep it that way. I’ve studied writing and I’m glad I did but it also made it more difficult. Painting is easy. You have to keep something easy.

To my high school self. To keep writing. But maybe also to go out and do other things as well. Don’t be afraid to make friends. And don’t date seriously until you’re in college. To my college self: these are possibly your best years so stop complaining and also, drink less!

To pay attention to the world. All the material  you need is right there. Observe others. Oh, and talk to children. They know it all.

Usually, I get an idea. Then I write. Well, I sit first. But I write after sitting. You have to sit otherwise you’ll be standing. And it’s not really that easy to write standing. I guess you could. 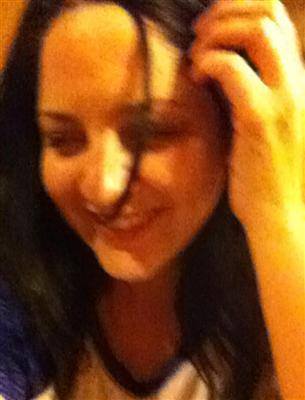 Andrea Fekete was born and raised in southern West Virginia. She has one published novel, one published chapbook, but not many friends since she stopped drinking. She resides in Charleston,WV with her cat Buddy.

Riding a beer truck
wasn’t comfortable but
the experience was quite
exhilarating, in much
the same way that the
dangerous combination
of scarves & convertibles
resonates with a specific

audience. She had rented
a red Mustang to use
over the summer, hoping
it would put icing on to
the vacation cake. The
moon was almost full. 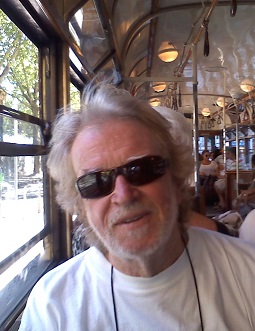 Mark Young lives in a small town in North Queensland in Australia, & has been publishing poetry for more than fifty-five years. He is the author of over thirty books, primarily text poetry but also including speculative fiction, vispo, & art history. His work has been widely anthologized, & his essays & poetry translated into a number of languages.

Jennifer Lagier is both a regular contributor to Your One Phone Call & In Between Hangovers! As well as many other fine journals and magazines. She has a new chapbook out right now and here’s a link so you can get a copy.

Its raining heavy and in a
few weeks I will be leaving
the suburbs—hopefully for
good this time—after a year
in hell
frozen in winter
scorched in summer
and nothing much in between
with neighbours I’d prefer to
forget
no new relationships worth
mentioning
and memories that mean little
and I know now that you
understand what I am saying
otherwise you would not have
read this far:
we are all trying to escape our
hell
and some actually do
and for the rest of us there are
regular plans
all with the hope they will
finally get us there—
this time.

On the crumbling scaffold,
over there, the rope is shrinking.

It is like a string of rancid pearls,
shrouded by a skin of sorrow,
blanching like a girl
about to lose her virginity.

The rope resembles a matador
of dusty arenas of a distant past,
now unable to fight anymore.

I often amble among the pieces
of forgetfulness rampaging
the exhausted yard,
with the whispers of a familiar voice
disturbing the shadows around.

The leaves sleep, dead,
upside down on the rocks turned
into partial statues of dried sap.

One aspen leaf on the scaffold
is like the Bermuda triangle
that has taken you away.

This leaf, as green as the lightning
searching its body, is where
I have lost myself too,
bleeding, crying, dying, tortured.

We shared a bond,
grandmother, but not our house.

Amit Parmessur, who once hated poetry, has appeared in more than 130 literary journals, like Transcendence, Hobo Camp Review and Aphelion. He has been nominated for the Pushcart Award and Best of the Web. His dream is to master Hindi again, the language of his ancestors.