The bar man sniffs me quietly
sensing something awry.
The glass is always half-full for me,
he later tells me as he unhooks
my bra in a dirty alley.
I smile into the frosty darkness.
I’ve been here before and know
I must keep my sharp teeth
under wraps. But I’m easily bored,
and the gin is wearing off.
I press my paws into his pockets,
rub my muzzle against his face,
try to steal a little warmth.
He is panting now, and struggling
with my buttons, biting at my neck,
yanking my skirt a little too high
until it releases
the full glory of my tail. 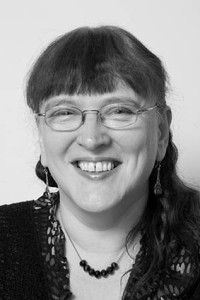 Julia Webb is a graduate of UEA’s poetry MA and a top notch procrastinator. She lives in Norwich where she teaches creative writing and reads books. She is a poetry editor of Lighthouse – a journal for new writing.

In the summer Winston’s a hare chasing bicycles and winning by miles. In winter he categorises his collection of found jigsaw pieces and tunes his cutlery. Each night he waits with his cat under starlight for his found poems to return to roost from the pages of journals published worldwide to his floating home in Calderdale UK.

Bore da, Dear Papa,
you didn’t teach us Welsh,
it wouldn’t get us very far
We must do something else.

We must speak London English
with never an ach y fi,
but then you took us all oop north,
where we gyan hyem fur wor tea.

next you sent me off to France
pour encourager les autres
and naur, now-in-a-minute
it was Latin’s capering goats.

The Shortbread eating primer
became my daily fare.
propelling me to Italy,
tho Greece I didnt dare.

But then I came to Scotland.
No more linguistic hell,
the Gaelic sounded marvellous
and Scots wis braw as well

and as for Scottish English
oh aint it la-di-da.
And now I’m ready to recite
Mae cymylau glau dros Wyddfa.

Nos da, Dear Papa,
I couldn’t help but be
a lingo-speaking native
in whatever host country

Nos da. Dear Papa
what language do they speak
Where you are now? Not Hebrew?
then perhaps tis Ancient Greek

Sally Evans lives in Scotland and has Welsh connections. She has had several books of poems published including Poetic Adventures in Scotland (2014) and the Bees (2008).

When I was nineteen I bought
a calla lily from a farm stand,
and I sat at a coffee shop and smelled it
until it touched my lips, and then I put it
between my lips, hoping no one would notice, and
then I bit it a little, not with top and bottom teeth
but teeth and lip, to see how it resisted, and then I covered
my whole face with it, like a mask,
then wore it like a hat, slinking there in the corner,
hoping no one would see,
then stretched its spathe over my hair like a veil,
I wore it like a bridal gown,
fell inside it, sliding down the spadix like a
tiny and clever pole dancer, or flower fireman,
and then I emerged, emerged, covered in
yellow pollen, born new, soft to the teeth.

killing you with a knife

killing you By watching TV

killing you with silence

killing you By being nothing.

The one you love

Ben Smith is a half hack writer and runs a dirty website called Horror Sleaze and trash. He has two cats, one wife and too many personalities.

Is where I should have
hit her into a deep section of stream
with a wooden fence post, repeatedly
until completely unconscious.
Then stood with one foot forcibly
upon the back of her unfaithful, lying head
for the exact amount of time
that it takes to smoke an entire roll-up.
Then walked away and pleaded ignorance.
But I’m only human and make mistakes
just like everyone else
upon this Fucked-Up Planet!