Another escape
Another experience
Another style and type
Another me 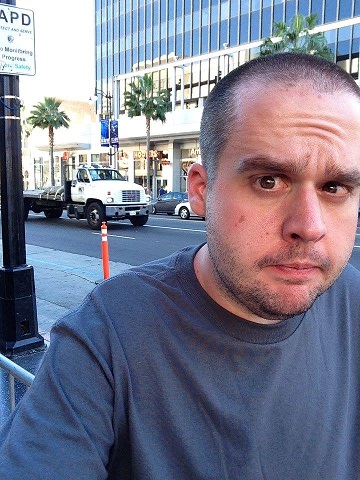 My name is Cole Bauer. I’m an American screenwriter, author, and poet currently in the dirty south of the U.S.A.. I was born and partially raised in the Twin Cities of Minnesota. I was raised and lived for most of my life in San Diego, California. I’ve lived, off and on, in Texas for six years. Traveled around America as well. I am inspired and motivated by street-writers like Charles Bukowski, John Fante, and Dan Fante. I enjoy clearing out my brain on to blank sheets of paper and empty screens. I love writing random short stories, pilot scripts, and film screenplays also.

Eventually – my father was QUIETLY homophobic 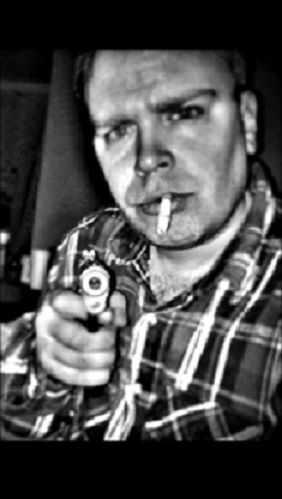 I am Michael F. O’Boyle. I have been sick to my stomach with my country’s image of itself. The alt-right make me sick and cry and shout for joy – for they are my inspiration. My hate is my gift to those people. I studied English/Lit at Hofstra University under the tutelage of my favorite professor ever – Dr. Maureen Murphy. She’d hate my poems

She had the most beautiful
long pair of legs, small
shapely breasts, blonde and
sexy and she’d call in on
me in the early hours
drunk and distressed and
I’d sit and listen and look
at those smooth legs as the
mighty Sibelius sounded
in the background and
she’d tell me of her lousy
rotten arguing boyfriends
and I’d talk to her and
look at those wonderful
legs and pour more wine,
knowing that I’d maybe
get in-between the pages,
if I’m lucky,
of some shitty poetry
publication, but never
between those perfect
legs of heaven.

The 10 Pack Priest and the Hava Notha Kid
walking along minding own business
when prison blows dynamite
saving millions of taxpayer dollars,
not to mention the trouble
& expense of rehabilitation,
and the Priest said gold
bless them every one,
and the Kid
said “Mortgages
is a safe to say
respectable line of work, like
mortuary, or stockbroking;”
Priest couldn’t agree more
but thinks first when he sees streak
of eerie ghost flesh pouring down the moonlight—
looks like a war’s on
cause this is the last run,
last match, last belly to the bar,
running blue steel ectoplasm out front
and searching for dominion—
growl or get grabbed, baby,
yells the Kid and off
churning windmills fast to pavement,
racecar vision of a landscape,
the ghosts bound to catch
a dollar running thru radio trade
gantlet promo greenback dustbin,
some spooks firing random
shotguns like porno crew
with a bucket of white paint—
Kid leaps Priest into gutter
as a dead bone blows
a ghost load into somebody’s trailer

A multi-media artist living near Washington, DC, Jeff Bagato produces poetry and prose as well as electronic music, glitch video, sticker art, and pop surrealism paintings. Some of his poetry has appeared in Empty Mirror, Futures Trading, In Between Hangovers, Otoliths, Your One Phone Call, and Zoomoozophone Review. His published books include Savage Magic (poetry), Cthulhu Limericks (poetry), The Toothpick Fairy (fiction), and Dishwasher on Mars (fiction). A blog about his writing and publishing efforts can be found at http://jeffbagato.wordpress.com

In the absence of a significant war,
the history takes cover in
a small, windowless house.

Despite all imperfections,
tomorrow takes its time.

Now everything happens
in the same place.
Awaiting a reality check,
I struggle to read between the lines.

The children toss the coin
by a sealed exit.

Maria Stadnicka is a writer, freelance journalist and lecturer. Winner of 12 Romanian National Poetry prizes, she worked as a radio and TV broadcaster. She has lived in Gloucestershire, England since 2003. Published poetry collections: O-Zone Friendly, A Short Story about War, Imperfect. http://www.mariastadnicka.com

do you understand
i will be the force that unearths
your bones from your body
that leaves blood upon the pure driven
white snow that you insisted
i was not?
because heaven knows i have a temper,
and yet that comment was
unnecessary;
just as the unshattering of my heart by your
hand untrue
so take this knife and let me drink your wine
give all these pomegranates of yours
a place in me to hide
so i don’t have to face their childish displays anymore—
howl to the moon, wolf, she won’t save you
she’s my mother;
and she told me i always deserved better than you
her light will cut you and the sun is your
enemy, too;
kiss my lips i will pierce you with your every transgression
until all you can bleed is black and broken
i will seal your voice away in the
earth and let it be swallowed forever because you
took my voice once and i will never allow that again because
you never realized i’m an alpha female
i am in control
not you.

Linda M. Crate’s works have appeared in numerous magazines and anthologies both online and in print. She is the author of four chapbooks, the Magic Series, and the forthcoming Phoenix Tears.

we milked
all that venom
from cells, texts,
landlines, e-rants,
those not so private
messages, the
hostile
close encounters
and violent
telepathy
and found
there was enough
serum
to save our
heinous souls
even to
the final strikes

Wanda Morrow Clevenger is a Carlinville, IL native. Over 369 pieces of her work appear in 132 print and electronic publications. A magazine-type blog updated at her erratic discretion is here: http://wlc- wlcblog.blogspot.com/ She is currently polishing a full-length poetry manuscript.

I’ve been staring down this street
for three and a half hours now.
I’m standing, shivering in a shop doorway,
this side of the picture frame,
getting ready to brave
the inclement weather of the day.
This is not a mere watercolour,
but, a portal, an entranceway…
look at that rain-soaked road…
you could pebble-skim wishes off it,
it’s as alive and real as my beating heart.
It could be any number of Towns
across Mainland Britain,
everyone of them familiar and home.
Someone’s waiting for you
just around one of those corners,
you can feel the expectancy.
That is Winter captured perfectly,
with miracles and magic
crafted magnificently from his brush.
A hermit hovel, prison cell
or any other place of confinement…
and that one picture, work of art…
would be the only thing I’d need
to help me escape back down that road
to everything that ever once was…

Outside Fort Garland, air is dust
I talked to Blanca Peak for over an hour
but conversation with a mountain can be tricky
I pass a trading post, see a couple skinny kids
crusties in black, bandanas keep dust out of lungs
they haven’t got a sign, just thumbs out
I drive past. I don’t pick up hitchhikers
I get up the road, feel bad
no one should have to stand in a dust storm
on a 100 degree day in The Great American Desert
I turn around, pull in the parking lot, they climb in

Jake, 22, jumps in the front seat
Dylan, 19, she’s in back
Both happy for the ride, Dylan has little to say
five miles passes, she’s asleep

He’s front seat jittery
We talk. Alex Chilton’s “Flies on Sherbet” plays
He’s never heard Big Star, I tell him their story
I tell him about the trip
He asks me about the east
particularly curious about Georgia
I tell him hot and green
He’s not familiar with green
at least not east coast green

I ask we’re he’s headed, he’s headed home
right on my way, an easy two hour ride
I can tell he’s not excited for homecoming
I don’t press

He eventually cracks
confessional the way you can only be with strangers
He found out the other day
his ex-girl from home is pregnant
He’s not sure it’s his, but he has to go home
deal with it, deal with his mom, whose pissed
He’s not sure what Dylan’s going to do
there really ain’t no place for her
in the dust storm of accidental creation

She’s free to go, he doesn’t want her to
When he told her, she said she may head back to New Orleans
He says a friend of hers was murdered recently
she wakes up nights saying her name
she thinks her friend is calling her back
He hopes they’ll catch each other on the road
nothing is sure

I drop them, interstate edge, exit ramp in sight
a wanderer, a hanged man, a sleeping girl
the Colorado evening to swallow us 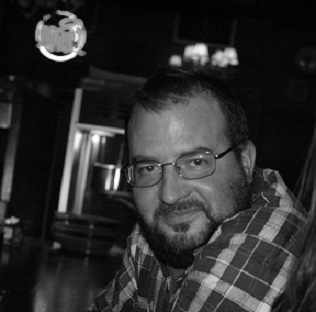 Jason Baldinger is a poet hailing from the Appalachian hamlet of Pittsburgh. He’s the author of several books the most recent of which, the chaplet, Fumbles Revelations (Grackle and Crow) is available now, and the collection Fragments of a Rainy Season (Six Gallery Press) which is coming in September. Recent publications include the Low Ghost Anthology Unconditional Surrender, Uppagus, Lilliput Review, Rusty Truck, Dirtbag Review, In Between Hangovers, Your One Phone Call, Winedrunk Sidewalk, Anti-Heroin Chic, Nerve Cowboy Concrete Meat Press, and Heartland! Poetry of Love, Solidarity and Resistance. You can hear Jason read some poems at jasonbaldinger.bandcamp.com

You are white as a sheet by the time you enter the room
pushing open the door, saying my name
as you did all the way down the hall
when the nurse came to get you

which we all know
is never a good sign.

What what, you keep asking, what
white as the paper gown I am pressing to my chest
as you look from me to the nurse
to the doctor
and I can barely get the words out
because I’ve already started shaking
so badly my teeth are chattering

dropped into the black pool of me
with a chain on my ankle
pulling me under.

Ally Malinenko is the author of the poetry collections The Wanting Bone, How To Be An American and Better Luck Next Year as well as the novel This Is Sarah. She lives in the part of Brooklyn the tour buses don’t bother with.