In college I loathed the cafeteria’s
foods: noodles, peas, cold fries.
I’d rather starve than eat food
I can’t swallow. The school
slept in a village by an estuary
near the bay, and, a loner even then,
I refused to room with anybody—
slipping through twenty-five roommates
in a semester because I obsessed
about Robert Mitchum movies. I wore
ski masks lumbering to class, pretended
I was one of Eddie Coyle’s friends.
Shivered in my solo room with posters
of Veronica Lake and Mitchum
on lavender walls, looming above Valhalla
Roses, the loudest punk metal band alive.
The fog thickened by the pier, and I ambled
through it on mornings I wasn’t flunking trig.
In sunglasses, I dreamed of joining the navy
but couldn’t swim, so I dreamed of airfields.
Yet I didn’t want to fly or sleep in bunkbeds.
Then on graduation day, I threw a dart
at a spinning globe and wounded Latvia.
I’ve been trying to emigrate ever since. 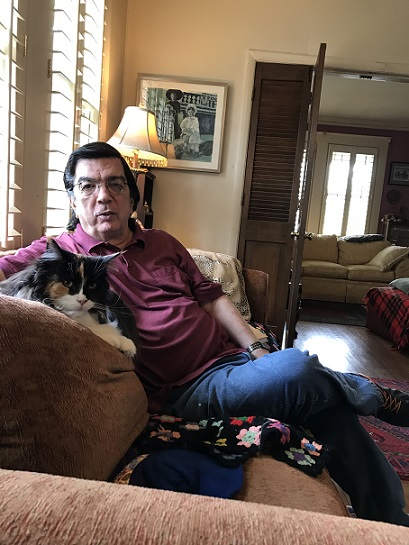 David Spicer has had poems in Chiron Review, Alcatraz, Gargoyle, Ploughshares, The American Poetry Review, and elsewhere. The author of Everybody Has a Story and four chapbooks, he’s the former editor of raccoon, Outlaw, and Ion Books. He is scheduled to have From the Limbs of a Pear Tree, (Flutter Press) released in the Fall of 2017.