I said it a long time ago, and I think it’s still true: I write because I cannot not write. Sometimes I agree with Jack Spicer that poets are radios picking up whatever is coming in on the ether. There are a lot of transmissions coming in on my frequency. I write so that ten thousand years from now these moments will not have been lost. I write because I love. Because I have lost friends to death. Because the sun comes up. Because the sun goes down. Because the birds, the wind, the sky. The trees and grasses. Because I can’t do anything more useful. I can’t do otherwise.

I’m at that the stage in my life, finally, when I can buy as much poetry as I wish. And I have been buying a lot, hundreds of books: as many Collected Poems by American writers as I can find, or their Selected Poems. I read every day, and finish a book every couple of days. Who knocks my socks off? These are among those I’ve read in the past couple years who did: Jane Kenyon, Linda Hogan, Joan Naviyuk Kane, Linda Gregg, Sharon Olds, Linda Pastan, Naomi Shihab Nye, Lisel Mueller, Ruth Stone, Jean Valentine, Louise Gluck, Mary Oliver, Mary Ruefle, Louise Erdrich, Joy Harjo, Kay Ryan, Kathleen Jamie, Lynda Hull, Ellen Bryant Voight, Philip Levine, Philip Booth, Jack Gilbert. By time time I’ve read several more stacks of books, this list might be expanded considerably. I also recently read The Dream We Carry: Selected and Last Poems by Norwegian poet Olav H. Hauge, and was bowled over. I’m in the middle of The Poetry of Pablo Neruda and The Collected Poems of Octavio Paz. I’ve read a couple translations of the complete Sappho. I’m working through two anthologies of Anglo-Saxon poetry, two anthologies of sonnets, anthologies of women poets of Japan and China, and an anthology of ghazals edited by Agha Shahid Ali. In addition, there are my old stand-bys: William Carlos Williams, Robert Creeley, Lorine Niedecker, Cid Corman, Bob Arnold, John Martone, Jonathan Greene, George Oppen, Charles Olson, Ted Enslin, Carroll Arnett, JD Whitney, Simon Perchik, William Bronk, Larry Eigner, and Robert Lax. From the middlewest: Bill Kloefkorn, Ted Kooser, John Judson, Phil Hey, Mark Vinz. I have also learned from various Japanese and Chinese poets in a variety of anthologies. This list is just a start: these are only some of the books I keep close.

Inspiration = “breathe in.” Everything I breathe inspires me. My ON switch is turned on, and seldom gets turn to OFF, so anything is possible for poetry. I have a faux sonnet which argues that loss and love are the two proper subjects of poetry, and I write a lot on both those subjects. Many of my poems are prayers, or are songs of praise, or psalms of thanksgiving. Every blade of grass. My friends the trees, the finches, the red tail hawks. The light, my God, the light. One cannot stop saying thank you for that.

My wife Mary thinks I am somewhat obsessive-compulsive, so there’s that, too.

I wrote my first poem when I was in sixth or seventh grade, during a blizzard on our farm in Iowa, some time after we had studied Longfellow’s “Snowbound” in class. Fortunately, that poem has been lost. I wrote another poem when I was about fourteen, about loneliness, longing, a lone seagull, waves lapping the shore of the ocean, the end of the world, you know, all that teen-age angst. Fortunately, that poem has been lost too, yet is started me on the way. By the time I was a senior in high school, I was a poet, and people knew I was a poet. They still know that. A lot of them see me as upside down and backwards. And I suppose I am.

I wrote a memoir about growing up on that Iowa farm, Curlew: Home, that was a look back at my childhood and a present-day journey back to the place I grew up, to try and understand how I became a poet when none of those other people did. I didn’t really find a clear answer. It has something to do, I think, with standing at the edge of the grove looking west at the setting sun and longing for something beyond the horizon. Longing and loss — these still fuel my poetry.

Writing runs in the family, what can I say? I have a nephew (Steve Gehrke), a first cousin (PF Allen), and a first cousin-once-removed (Susan Montag) who are fine published writers, award-winners even. Being the oldest, I was the first, and then there were more of us in the family. I don’t think this is mere coincidence — there’s something in the genes which says: WRITE.

How do you deal with rejection?

I understand that what I choose to do is not everyone’s cup of tea. I understand that editors have to choose: you can’t put ten pounds in a five pound bag. I understand that some editors don’t know a good poem when they see one. I’m okay with that, too. Treat me with respect when you reject me, and we’re okay. Say “Your poem made my day” and I’ll love you forever.

Refer back to the list of books above for a more complete list. I place myself on the contiuum which starts at one end with William Carlos Williams and concludes at the other end with Robert Lax, and includes Black Mountain and Objectivist poets and others of similar outlook: Robert Creeley, Lorine Niedecker, Cid Corman, John Martone, George Oppen, Ted Enslin, Carroll Arnett, JD Whitney, Simon Perchik, William Bronk, Larry Eigner, and others. I’ll be teaching a class this spring on “Writing the Lean Poem” at The Mill: A Place for Writers [ http://www.millwriters.org/ ] and will use as examples some poems by these writers and some of those others I’ve listed above. Sometimes I go to open mics and hear poets reading poems that don’t know what they are about; they could include anything and everything, and too often they do. The “Lean Poem” I’ll be teaching doesn’t have that problem. The poets I’ve listed here don’t have that problem: everything is necessary. My shorthand for the good poem comes from Basho’s frog poem: I say that in every good poem, the frog has to jump. I admire poets who write poems in which the frog jumps.

I play bass with my friend Doug Burk in Ripon, Wisconsin, who plays guitar. We play to amuse ourselves. I have also written lyrics for three albums worth of songs with Doc Abbick and Dean Schechinger for our “Doc Abbick and Trinity” CDs, which are available at CDBaby.

Buy more poetry sooner. Read more widely sooner. Listen always for the moment when the wind speaks. Don’t be afraid to believe in your work when others don’t. Don’t stop when it doesn’t seem to be going well. Don’t let the bastards get you down.

Since I am retired, I’m able to sit for longs stretches at my desk admiring the view out the window or reading or drinking coffee. I admire the view or read until something in my internal chatter strikes me as worthwhile to write down, and then I follow to see where it wants to lead. Sometimes it’s nothing. Sometimes, however, it is worth catching. I’m writing in long-hand at this point, which can get quite messy with circles and arrows indicating how to follow the changes. Stage Two is to type the thing up; and there’s seldom a time when running the words through my typing fingers doesn’t create additional changes, for my fingers always seem to know things that my brain is not aware of. Stage Three is to print the poem out and mark further improvements. This can go on for awhile. If I’m not satisfied yet, it then goes into the Compost Heap, for later review. If I’m happy with it, I’ll send it out. Sometimes they get accepted. More often they get rejected. Occasionally an editor will make suggestions, which I am happy to consider, especially when it’s obvious the editor understands what I’m trying to do. Sometimes poems come back and I see they really weren’t ready to go out, and they go into the Compost Heap for a while longer. I sometimes tell people I am an okay writer, but I am a terrific reviser. I don’t often get it right the first time, but sometimes I get it right eventually.

I might add that I write a lot of poems when I travel. Motion seems to move me, so to speak. Much of the poetry I’ve posted over the past seven and a half years at The Middlewesterner [ http://middlewesterner.com ] was written in the car. It still happens. I got a great pile of short poems out of my trip to New Mexico this past January, which I’m working into a project called “Notebook: New Mexico.” The world seems to want to speak to me when I’m in motion, and when it does I have to stop and pay attention. I can’t do this when someone else is in the car: I have to be traveling alone.

Another thing you need to know, maybe, is that I write the first draft by long-hand on the back of scratch paper folded in half, to 5.5″ x 8.5″. The point is that it’s not a big blank sheet of paper, which used to scare me off. And I don’t always start at the top of the page. If I think the line I’ve got will come at the end, I’ll start at the bottom of the page. Sometimes I write sideways and upside down. Whatever it takes to get it splashed onto paper. At this point, it doesn’t have to be beautiful, it just needs to get the bones or structure of the poem in place, and then I can go back and revise. As I say, I’m a great reviser. 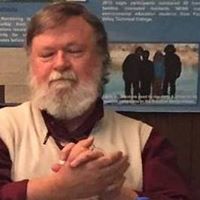 Tom Montag is most recently the author of In This Place: Selected Poems 1982-2013. In 2015 he was the featured poet at Atticus Review (April) and Contemporary American Voices (August), with other poems at Hamilton Stone Review, The Homestead Review, Little Patuxent Review, Mud Season Review, Poetry Quarterly, Provo Canyon Review, Third Wednesday, and elsewhere.